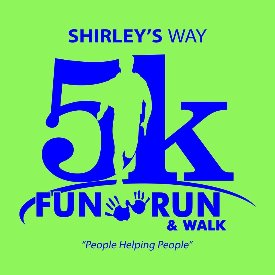 The average person cannot afford to survive cancer. Our mission at Shirley's Way is to be an extension of the household income and help local families throughout the year. Mike Mulrooney, son of Shirley Mulrooney, began Shirley’s Way after her death, in 2013, to give back to those fighting the fight against cancer. When his mom died, Mike promised her that he would do something different in the world and keep her memory alive. So he started Shirley’s Way by printing "Cancer Sucks" t-shirts and selling them online. He took the money he raised selling t-shirts and applied for 501c3 status for Shirley’s Way. His life mission has turned into “People Helping People” and he believes that folks should always offer a helping hand to someone in need, because it is the right and moral thing to do.

No upcoming events hosted by Shirley's Way at this time.

View other local races in Louisville.