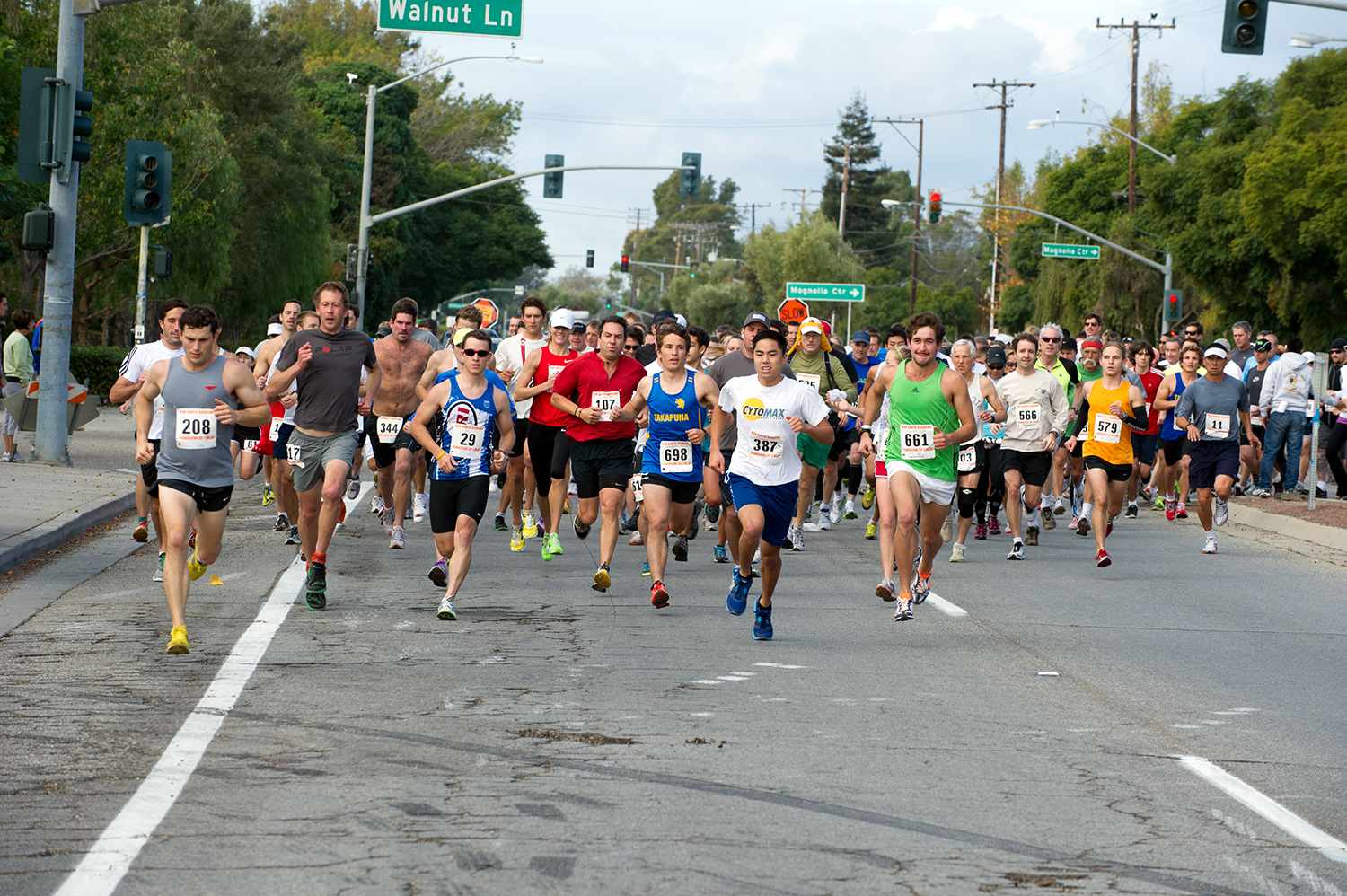 The 20th annual running of the original Santa Barbara Thanksgiving Day 4 Miler. The flat and fast course stands apart from local runs with a straight away start down Hollister Avenue to Turnpike and then along treed bike paths and finally through a local neighborhood finishing in Thunderbird Park just off Walnut Avenue. ON LINE Register closes Monday...live registration will be available Wednesday at 110 Anacapa Street SB CA noon to 5:30p.m, and again Thursday morniing 7:00a.m to 8:45 a.m....RACE STARTS at 9:05a.m.

On a somber note, while we will be able to give Thanks, we are dedicating this years run to  the memory of a Hal Finney.

Hal's wife Fran wrote: "The Thanksgiving race was always a special on for Hal and me. It is right in our neighborhood. and the holiday itself has enormous meaning - Hal and I were thankful for every day he was able to spend with us."

Hal was 53 years old in March of 2009, when he first showed symptoms of ALS, or Lou Gerhig’s disease. About 5 years earlier, he had lost 50 pounds through exercise and diet, and in 2009 he was in the best shape of his life - running 50 -60 miles per week and training for the Los Angeles Marathon.

In 2009, Hal was diagnosed with ALS. He was still running, but much more slowly. Speech was becoming more impaired, and he was having difficulty writing. Hal stopped competing in races, content to run for pleasure and support Fran at the races she competed in. He also continued to work, but gave up driving, working from home writing computer code, typing using only his left hand.

The disease progressed rapidly. Hal made a decision early on to utilize any means and medical assistance available to stay alive, as long as he hd some way to communicate.Fran was  committed to doing whatever was necessary to keep him living at home, as opposed to in a facility. By April of 2011, Hal no longer could talk, walk, move his arms or legs, swallow, or even breath on his own. He still enjoyed coming out to see Fran in races, and on the days when he was physically not up to leaving the house, Fran would give him a full race report. As of late 2011, Hal's only controlled movement and communication was through his eyes. Although he lost the ability to control his blinks, he was still able control what his eyes looked at. He used this to speak through an eye gaze interface computer, and also to signal "yes" or "no". Following Hal's very specific advanced directive, he was taken off life support, and his life ended on August 28, 2014, at the age of 58, having lived with ALS for over 5 years.
In addition to the donation Run Santa Barbara makes annually to a few local causes, we will be making a donation to Los Angeles Chapter of the MDA in honor of Hal Finney...and we are setting up a donation page in his honor. Please give Thanks for the life we have and please consider supporting ALS research.

The run starts at 9:05 a.m.. Open day of race registration will start at 7:00a.m. in Thunderbird Park off Walnut Avenue just north of Hollister Avenue. Day of race registration is $40.00 dollars and shirts will be included as long as the supply last. We ask you to please register early and you can pick up your race bib/shirt on Wednesday November 26 at the Hazards/Santa Barbara Running Store located at 110 Anacapa Street, near the beach in Santa Barbara.

Day of race parking is available at the rear/right of the Magnolia Shopping left (please do not park near the entrance of Ralph's as they are open for business) and in the rear parking lot of the Episcopal Church just East of the Walnut/Hollister intersection.

Please remain in Thunderbird Park for pre-race information and the call to the start line.