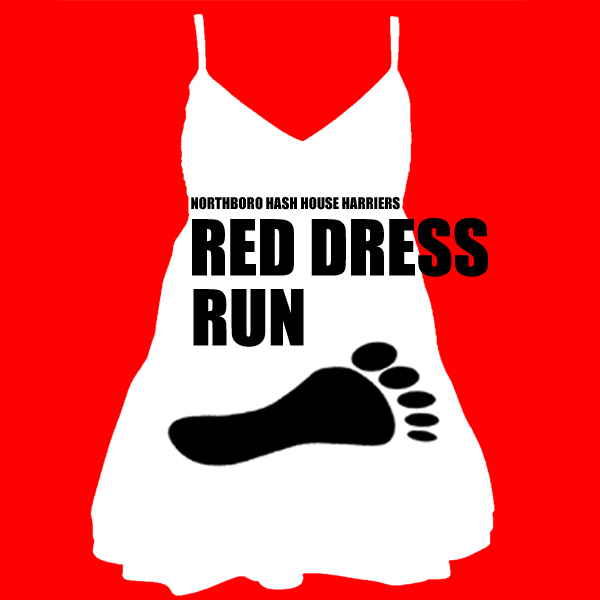 On a Hash Run, some lead runners, called "Hares," take a head start to mark a spontaneous course with flour and chalk. When the Hash Run starts, the other runners, known as "Hounds," will chase after the flour and chalk marks to try and snare the Hares.

RED DRESS RUN honors a Hasher in Long Beach, CA, who attended her first Hash, in 1987 while wearing a Red Dress instead of running clothes.   After being mocked for wearing that, she ran the course anyway, and other hashers of both sexes were so impressed that they began wearing a red dress as a joke. Soon, the RED DRESS RUN became a tradition for Hashers around the world.

MEN AND WOMEN MUST  BE 21+ AND WEAR A RED DRESS TO PARTICIPATE!

The course for Red Dress Run is a closely guarded secret, but the Hares promise there will be at least three checkpoints to stop, take a drink, sing a song, and socialize. Stopping at checkpoints is mandatory because the Hares will be there waiting for the last runner to arrive before departing to continue marking the course. The course is not timed.

The 5K course is a secret,but it begins and ends at American Legion, 402 West Main Street, Northboro, MA. Expect there to be some on-road and some off-road running. Also expect to be on the course from 12:10pm until approximately 2:30pm. Don't miss the "Circle" ceremony after the run, at approximately 2:30pm - 3:30pm.

For more information about the Northboro Hash House Harriers and about hashing, visit NorthboroH3.com.