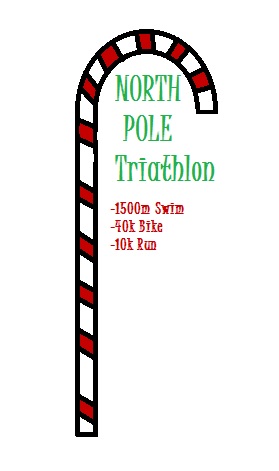 The North Pole Triathlon is an Olympic distance race held in and around Chena Lake Recreation Area in North Pole, Alaska.  The race gives racers the opportunity to swim in one of the best open water areas in the area and to bike on very flat and smooth roads through a great community.  The run will be on a combination of paved and gravel trails within the Chena Lakes Recreation Area. We hope you will agree this event is yet another great race that locals that be proud of and experience the world of triathlon racing.  This race will be a great introduction to anyone who has never swum in an open water race and wants to give it a try.

The water temperatures at Chena Lakes are highly variable so it is advised that athletes come prepared with wetsuits. Wetsuits will be allowed for all participants if the water temperature is less than 78 degrees Fahrenheit. The swim portion of the race will begin with a mass start and will be 1500 m in length.  The course will be marked with large orange floats. The race will begin at the swim beach of Chena Lake and proceeds northward around the peninsula and then cuts across the lake to the far eastern bank where you will exit to transition to the bike.

Due to two separate transition areas we are asking that everyone surrender their bikes and running items 30 min prior to race start so that way everyone will have enough time to get to the swim start location and hear all of the race instructions.

The bike course is 40 km and will be ridden on the public road way.  Please make sure that you observe rules of the road and stop at all stop signs and while making left hand turns.  We will not be stopping traffic so you will need to be aware of your surroundings at all times.  Ride as close to the shoulder as possible and use caution when passing.  NEVER ride two abreast since that is against USAT rules and regulations.  We are visitors to the North Pole area and want to be allowed to continue to race in the community and abiding by the rules of the road will help us succeed with that.

The bike course will take you throughout the surrounding area of Chena Lakes.  We will not stop traffic during the race so please use caution while out on the roadway and at all intersections.

The bike route starts on the eastern shore at the 1st parking area on Lake Front Drive.  From Chena Lake, you will proceed out taking a right onto Laurance Road and proceed out of the recreation area and taking the 1st right turn onto Nelson Road.  You will the ride north on Nelson Road until you reach a stop sign.

At this point you will turn left onto Plack Road (please note we will not be able to stop traffic at this intersection so you will need to obey all traffic rules).  Proceed west on Plack Road until you reach the next stop sign at the intersection with Badger Road. Racers will turn right on Badger Road and travel north until they reach Repp Road where they will again turn right. Proceed on Repp until turning right on Hollowell Road. Racers will then ride south on Hollowell Road until the stop sign and the intersection with Plack Road.

Racers will need to cross Plack and return to the Chena Lake Recreation Area retracing the path using Plack, Nelson, and Laurence roads.  Racers will continue all the way north on Laurance road until reaching the turnaround point.  Circling around the island in the roadway and then riding back to the transition area will complete the bike portion of the event.

The run is 10 km using a combination of paved and dirt trails.  It will be well marked. The run consists of one large loop with a short out and back followed by a shorter 2nd loop.

On the 1st loop racers will run out from the transition area heading north along the bike path on the eastern shore of Chena Lake for 1km and then veer left and then immediate north for 1.5 km where the short out-and-back begins. Racers will turn left at the intersection and proceed 0.5 km before reaching the turnaround point. At this point racers will then head east staying on the trail for 2.0 km before the trail veers south for an additional 2.1 km before turn right onto the paved bike path and returning back to the transition area and the end of lap 1.

The 2nd lap will again follow the trail north for 1 km. At this point turn right and proceed on this trail for 0.6 km then turn right and retrace your path back to the transition area and the finish.

The North Pole Triathlon will be raced in and around Chena Lake recreation area starting at 9:00am on July 11th, 2015. The swim will be a point to point beginning from the swim beach at Chena Lake. All transitions will occur at the 1st parking lot off of Lake Park Road. The race distances will be a 1500 m swim, 40 km bike, and 10 km run.