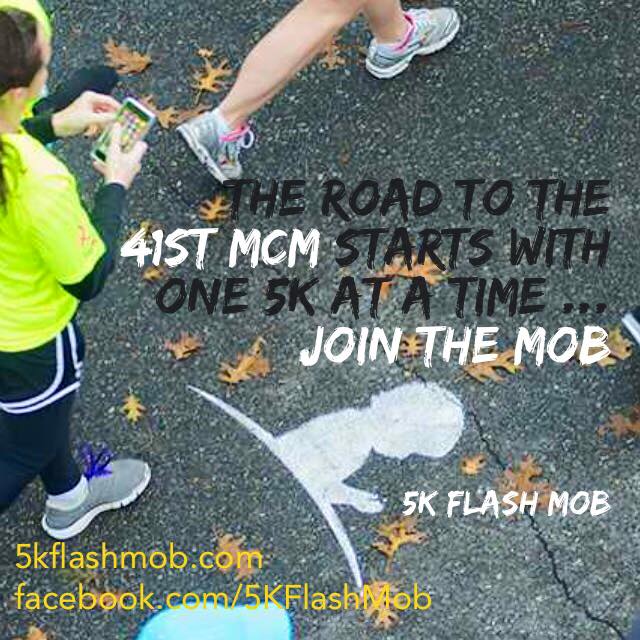 From Charleston, South Carolina to Albany, New York the 5K Flash Mob routes have transformed since its creation, and from Murphy's Irish Pub in Alexandria, VA to the Tavern on the Green in Central Park, the 5K Flash Mob's post run beverage has always been a good time as well as complimentary!

A 5K Flash Mob is a group of runners who assemble suddenly to run 5000 meters outdoors.  They complete this unusual and seemingly pointless act within 55 minutes, then quickly disperse, but often times will reassemble afterwards to rehydrate and replenish.

All are welcome to join in on the Flash Mob, because it is free, but only registered participants will receive a bib number.  Bib numbers have value, for free hydration awaits bib holders, plus gifts are often handed out at the post race assembly.

Join the 5K Flash Mob, and run a 5K, or walk just 1.6K (1 mile) course, because we “flash mob” for a reason.  The 5K Flash Mob will soon be a 501c3 non-profit, who will always support St Jude Children's Research Hospital, as well as local charitible needs!

Participants will be notified after MIDNIGHT, and before 7am, before and prior to the race, of when and where to go for you pre-race materials pick-up, the location of the start, the route, parking recommendations and the post-race refueling location.  When you receive the route, please ensure you become familiar with it, as this is a 5K Flash Mob and not a normal sponsored run; we are the 5K Flash Mob!  Water will be available before and after the race.