The Mechanics of Running and How it Relates to Performance and Injury - Part 3: Propulsion 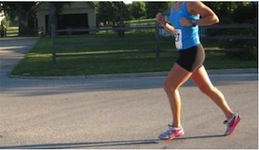 As a physical therapist, I have the opportunity to attend courses all over the country to learn from some of the top healthcare professionals in my field. Over the past year, I have gotten to attend a number of lectures given by some of the most prominent researchers/clinicians in the area of running gait analysis. This 3 part series I'm writing entitled, 'The mechanics of running and how it relates to performance and injury' is a synthesis of all that I've learned and studied about this topic over the last year. Part three of this series will focus on the propulsion phase of the running cycle.

Propulsion refers to the time in the gait cycle when your heel first rises off the ground (following midstance) to the time just prior to push off when your back leg leaves the ground for swing phase. The propulsion phase of gait is extremely important because it's where you get your big pay off in running. During the first two stages of stance phase (initial contact and midstance), our muscles and tendons are busy absorbing potential energy. During the propulsion stage, our legs use that stored energy to propel our bodies forward.

What is the biggest problem that most runners have during the propulsion phase?

We don't extend our hip, (i.e. not letting the back leg go far enough behind our body during the end of stance phase)! I get a lot of information about running mechanics from the work of researchers at the University of Virginia Motion Analysis Laboratory (one of the top 3-D running analysis labs in the country). According to the data that they have collected over the years, they have found that about 80-90% of runners don't extend their hips enough. Jay Dicharry (Physical Therapist and Strength & Conditioning Coach who is the director of the clinic) did an interview with Runners World a few years ago about this very topic. He was asked by Runners World what was the number one problem that most runners have. His answer was not overpronation at the foot ( only about 30% of runners truly overpronate) but, rather, lack of extension at the hips.

If we aren't extending our hips enough, we aren't taking full advantage of the potential energy that our legs store during initial contact and midstance. By not fully extending our hips, we are cheating ourselves out of the full power that we could have with each running stride. Another way to think about it is this: If you were to load a sling shot and then let go, you would want your sling to be free to shoot as far forward as possible to get the most out of the loading phase of your shot. Not extending your hips enough is very similar to loading a sling shot and releasing it directly into a barrier. You're storing good energy when you load it, but aren't getting a full return from that energy when you release.

Why do runners not extend their hips?

It's really not just a 'runner' problem; it's a cultural problem. Americans spend most of their working day sitting down. We sit to drive to and from work, we sit at work, we sit on 'workout' machines at fitness centers after work, and then, when we go home, we do more sitting (not everyone, but definitely a majority). By spending so much time in seated positions, the front part of our hips (hip flexors) tend to get very tight. Having restrictions at the front side of our hips is going to affect the amount of hip extension we get on the back end of our running stride.

So what's the solution?

When it comes to changing running mechanics, not everything is that 'changeable.' Some things are a lot easier to change than others. Improving the amount of hip extension you get in your stride is definitely something that EVERY RUNNER can improve. That is, if we put the time into working on it. I believe that one of the most important stretches a runner can do is a hip flexor stretch (I would argue that the most important is the calf stretch, which is another topic for another day). In my opinion, the best way to do this is to first do a static lunge stretch in a half kneeling position. Hold for 1 minute and repeat 3x each leg and then follow that up with a dynamic backwards walking lunge stretch with an added overhead reach (do for about 2-3 minutes). Why is it important to follow up a static stretch with a dynamic stretch? When you stretch your muscles, and their surrounding tissues (tendon, ligaments, fascia), they don't always automatically 'know' that they can now move through a bigger arc of motion. In order to really get the benefit of your stretch, you have to 'use' the new range of motion you create through stretching (i.e. work the muscles actively into hip extension). I have found that the backwards walking lunge works nicely for this. Aside from static and dynamic stretching, I would even further say that you should work on strengthening the antagonist muscles opposite to the muscle group you are stretching (i.e. the hip extensors) to really ensure that the muscles 'know' about their new extensibility and range of motion. Three great exercises for this are the single leg deadlift, the kettlebell swing and some type of an explosive step up drill. I've added a video link at the bottom for those of you that would like to see a real time demonstration of the stretches and exercises I have mentioned. For further resources I would check out the interview I referred to earlier that Jay did with Runners World called 'Move those Hips.'