He Wore His Race Medal Where? 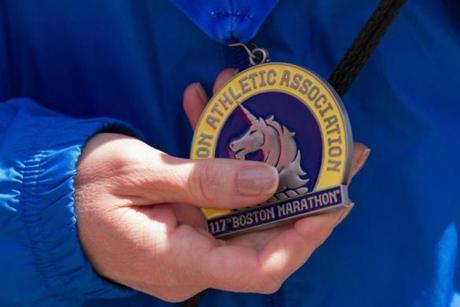 Awhile back, as I was perusing my Facebook newsfeed, I came across a picture of a friend wearing his half marathon medal at work. At first, I felt confused. I knew he had run a half marathon, but that was in February and this was August. I couldn’t help myself. I had to ask him what on earth he was doing wearing his medal to work 6 months later. Being new to running, he had never heard of race medal-wearing etiquette and thought wearing his medal to his class reunion (yes, he did this), nights out on the town (did that too), and even to work occasionally were cool. Whoa. This boy needed an intervention! So, what’s okay and what’s not when it comes to wearing the race medal? Here are a few basic guidelines based on group discussions on the matter and personal opinion.

1. Wearing your medal on race day. This one gets a thumbs up! You likely trained for months to get to race day, logging miles and avoiding injury. You earned that medal. Wearing it around on race day, even into the evening, is a very acceptable and even expected tradition, especially of marathon runners. I know for myself when out to dinner after a marathon, I enjoy looking around and seeing medals around the necks of runners who endured the same thing I just did. There is a certain camaraderie involved and it’s nice to connect with other runners this way.

2. Wearing your medal the next day. This is not okay. If you are itching so badly to make sure everyone knows you just ran the marathon, then wear your race shirt. This is socially acceptable and you will see plenty of other runners doing this. Wear your medal around town or even worse through the airport and on the plane flight home, and you risk looking like a braggart. I once saw a guy who was not only wearing his medal the day after a marathon, but also had his bib number pinned to his backpack for everyone to see at the airport. I’m not sure if he wanted a high-five, a pat on the back, or an “Oh, my God, did you run the marathon yesterday?”, but all I could think of was giving him a swift kick in the butt for being so pretentious and perpetuating the stereotype that runners are egomaniacs. Well, maybe not a kick in the butt, but I sure wasn’t going to give him the satisfaction of acknowledgement. Even, Bart Yasso, inventor of the “Yasso 800’s” and Runner’s World contributor, says after race day, “hang your medal on something other than your neck.”